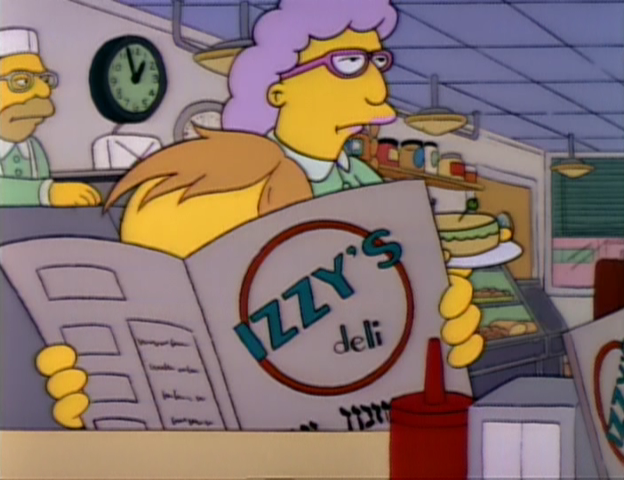 The Simpsons have an Izzy’s — a restaurant and deli in the fictional town of Springfield’s Lower East Side. They have several sandwiches named after celebrities, including one named after Krusty the Clown.

This is based on the real Izzy’s Deli in Cincinnati, Ohio, famous for the complimentary pickles Bart references. You can see Izzy Kadetz (the real owner) behind the counter, and his wife Rose is the waitress. They were famous for arguing with each other and being snarky with customers as mentioned by Rose when she responds to Bart sarcastically, “Watch how fast I go” as she mosies away from their table. Their menu is emblazoned with the actual old-style logo from the restaurant. 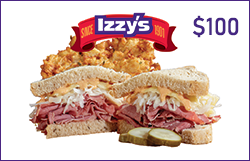 Izzy’s Gift Card Holiday Special! Give a gift of the World’s Greatest Reuben or any other Izzy’s Favorite for 20% off between now and Jan… 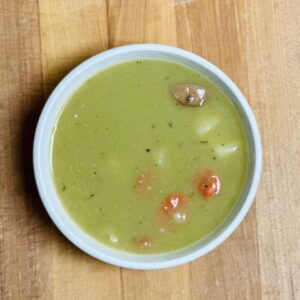 Split Pea Soup Is Back Warm up with our split pea soup this fall.  Tender split peas are slow cooked and combined with chunks of… 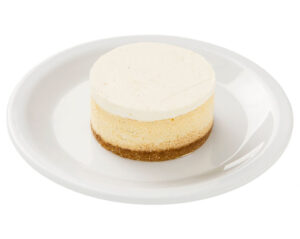 Try Our New Vanilla Bean Cheesecake Vanilla doesn't have to mean ordinary.  On a graham crust we add our smooth and velvety cheesecake flavored with vanilla…

Heaven on a plate.  Cant go wrong with just about any sandwich, but the Reuben is my favorite!

Beechmont has the best customer service. Always friendly when you walk in and leave. Ive never waited long to dine in or pickup.

You know what goes with that reuben? A nice cold beer.